Spicy fish “fry” that is baked instead, with some delicious Kerala style spice marinade. This is a great side to rice and curry or even an appetizer! 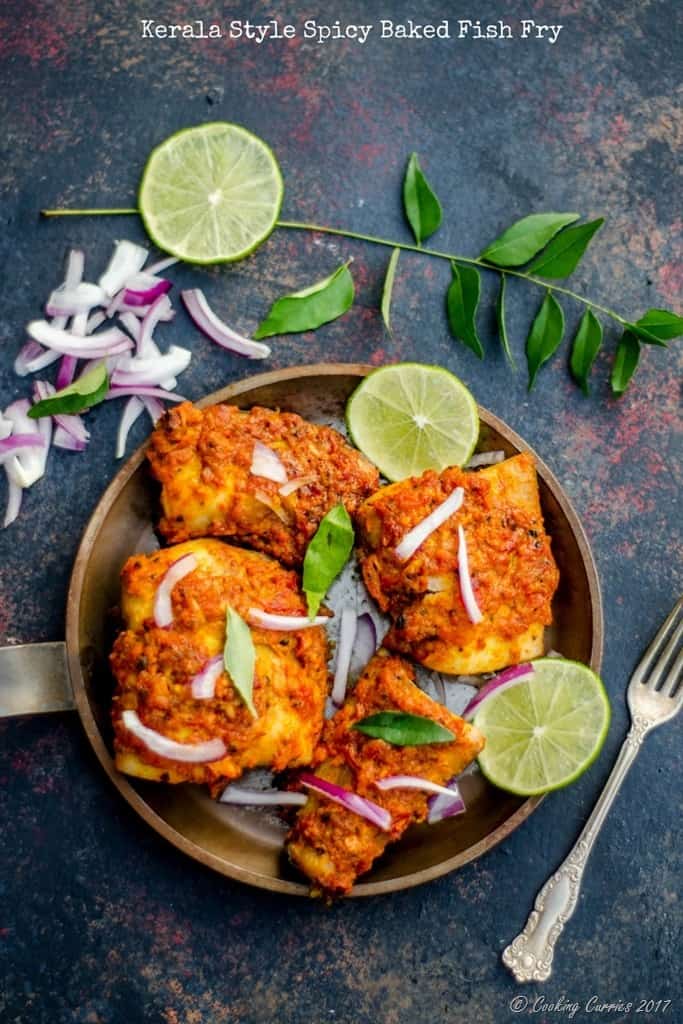 Being a vegetarian, you would think I will have a tough time cooking with meat and seafood. But its not. The reason I am a vegetarian is because I have been brought up one and Ive been one for way too long for me to develop a taste for meat and seafood and actually like it. I just treat them all as just ingredients and I don’t find them gross or unapproachable. Being married to a meat-a-holic helps too, as I use him as a testing board for everything meat and seafood I make.

Chicken and meat has been easier to make, as I know they can stand spices, especially in the Indian style preparations and once I got used to cooking with them and knew the ingredient, I ventured out to cooking with them in other cuisines and eventually, developing my own recipes with them. But seafood was something I was always a little intimidated by. 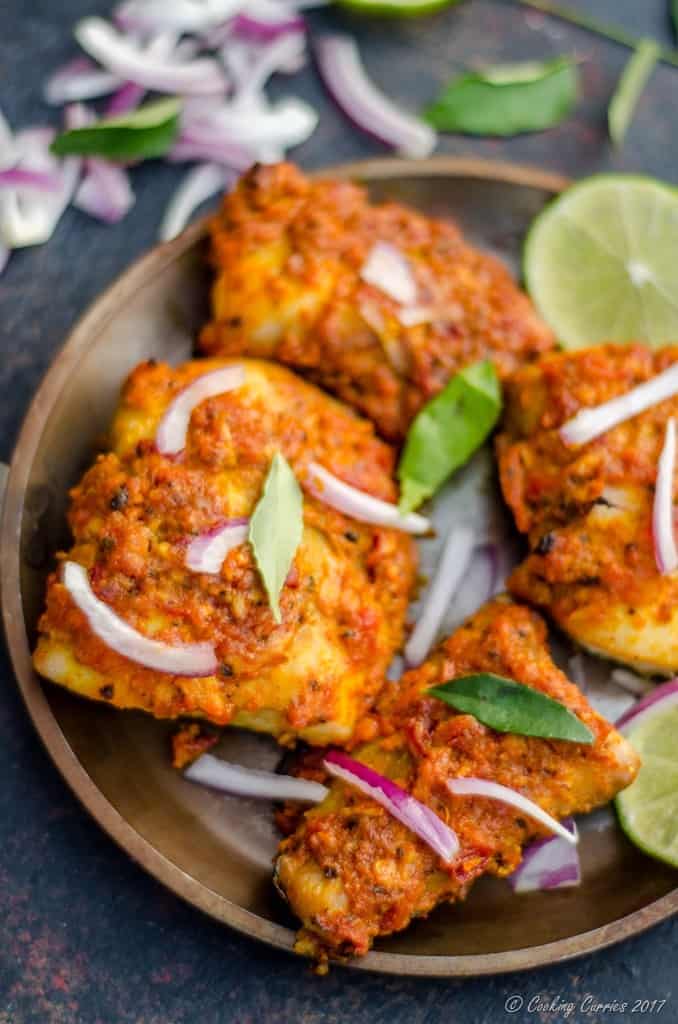 Fish and shell fish seemed too delicate, that I was afraid I would over power them with spices or worse, overcook them. But I couldn’t deny my mallu-boy ( the husband is from Kerala, where seafood is consumed widely and mallu is slang for the language Malayalam and also someone from Kerala) some good spicy seafood.

All Kerala seafood dishes are covered with spices and coconut, that I knew if I tried and experimented a little, I would eventually get it right. I used ready-made spices for fish fry and make a quick fish fry on the stove top for the husband, from time to time. I even ventured into making curries with prawns and I got that right. I was not comfortable making a good fish curry, up until last year, where I came up with the perfect recipe, for me at least, so I cant mess it up without tasting it 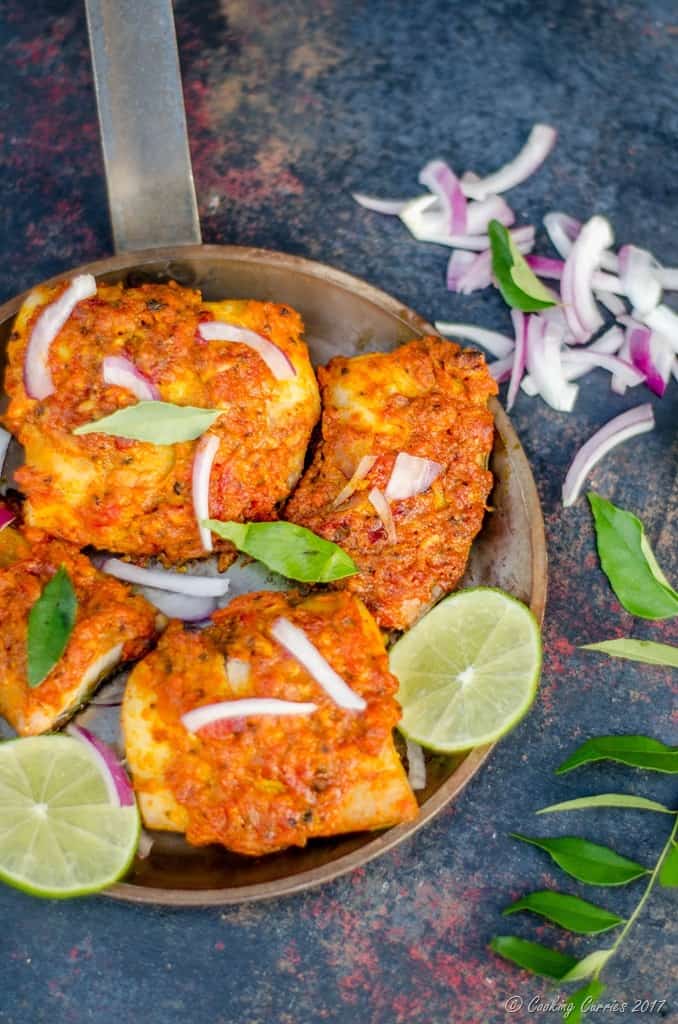 This baked fish “fry” is a similar recipe, where you really cant go wrong much. A good spice marinade for the fish fillets and pop it in the oven till the marinade is all cooked through. The fish comes out nice and flavored. Go ahead, try it, I know you will love it as much as my meat-a-holic did. 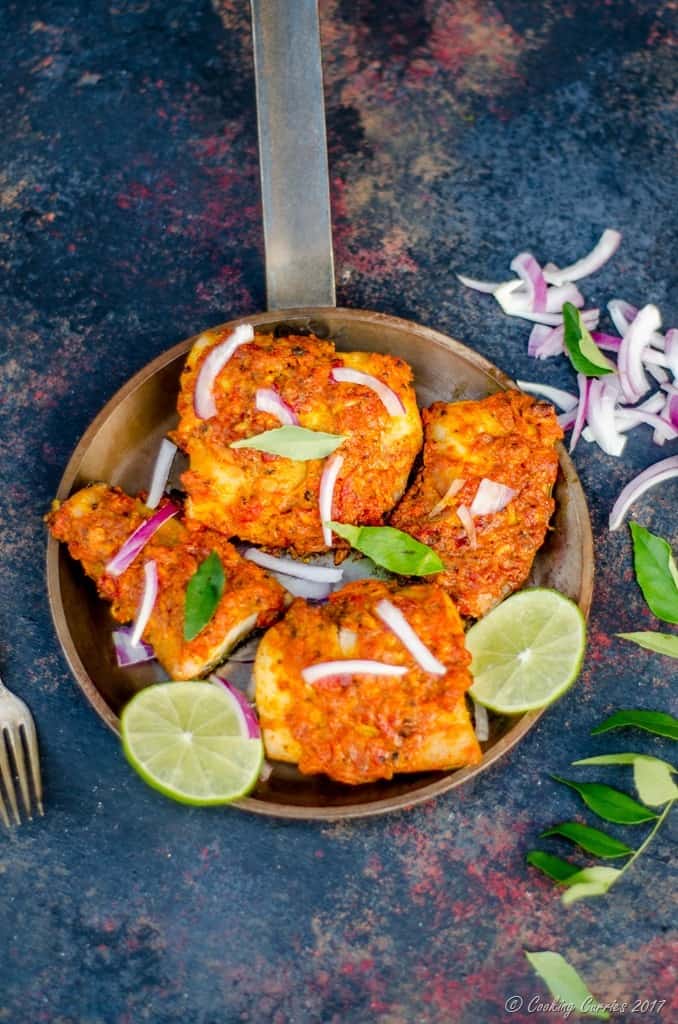 To crush together to a paste:

To check for doneness: teh spice / masala paste on the fish should have changed color slightly and not look too raw.

Pull up a chair and grab a cup of chai while I take you along on a fabulous journey in my kitchen. Whether you love to cook with spices or you are intimidated by them, I can help you discover the power of spices in your food.

While we cook, eat and drink wine, I will also show you a glimpse of my life as a mother of two, a wife and someone who loves to dress up, eat and travel the world.